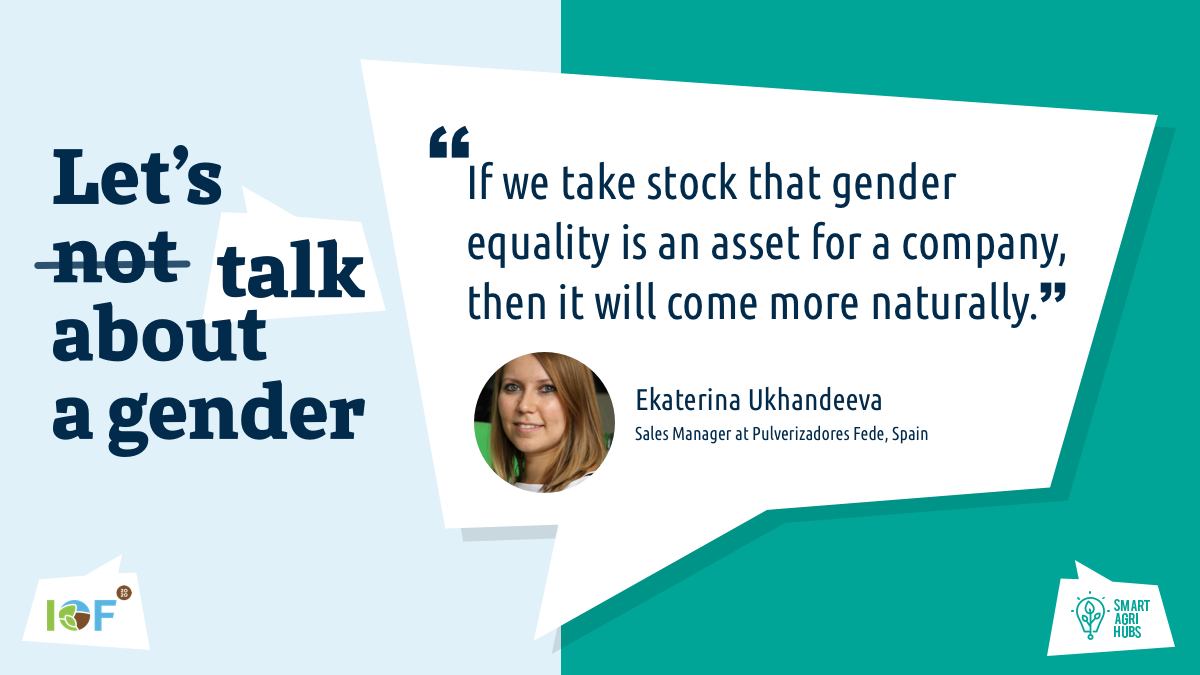 Can you elaborate a bit about your background? (city / countryside; formation, etc)

My name is Ekaterina Ukhandeeva. I am Russian and I live now in Spain. I originally studied Economics in the University of Samara in Russia. After my studies, I immediately went to Spain and it felt great since the beginning. I had no idea by then that the kind of equipment we do at Pulverizadores Fede even existed! The focus of my studies was International Business and that is precisely what I wanted to do when I approached this company which was already open internationally.

What was your experience at the university?

In Samara, the university of Economy was well populated with girls. In Russia, women have the same opportunities as men. Of course, there is still a sort of mindset in the population dividing what seems to be “manly jobs” and “womanly jobs”. But given that there are more women than men in Russia, they are for sure an important player in the functioning of society, and that may be even more true in Russia for this reason. It is not unusual in Russia that women raise children alone and contribute to the wealth of their whole family.

Why have you chosen this company?

I arrived at Pulverizadores Fede in 2012. This company gave me the opportunity. Imagine you are fresh out of the oven with no particular experience, you only know what you want to do. They decided to trust me from the start, even though I barely spoke Spanish at that time. They placed me in the sales department and I was able to take advantage of my English and Russian skills to achieve the missions they gave me. Now I speak Spanish just fine! The trust and support that this company gave me mean a lot. When I arrived, It was like a small family. It helped me a lot, especially in this sector not many women are travelling around as sales representatives. It happened a few times where people at sales conventions thought that I belonged to the administrative staff. I laugh at it now, at that time I was just happy to be able to do what I liked and did not care so much about the sexist remarks. Now the context has changed, it is not unusual to see women in these positions.

Can you mention a few of the gender equality measures that they have in place?

When I arrived at the company and started working in the sales department, I immediately noticed that I wasn’t the only woman. Of course, everyone is used to see women in all kinds of administrative jobs but there, one of the first women I have met was the financial director. I sensed that the company policy towards women was very encouraging. As the years passed, the company grew up and many more women were hired. Something that can particularly be noticed is the investments the company has made in the factory. They have adapted the production line so that people do not have to carry heavy loads anymore, which made it also accessible to women. The production system has changed to allow women to be part of it. Speaking of my department, I also noticed that they have recruited more women in sales, even from different countries. I find it quite impressive for a medium-size company such as Pulverizadores Fede that they are so active in gender equality and have this multi-cultural approach. The mentality is evolving everywhere. I see it from Spain, but my impression is that there is a general move in that direction. People understand that having gender-balanced teams is not harmful to productivity. Paying attention to these questions is now a good practice tip. And I am proud that Pulverizadores Fede, the company I am part of, don’t hesitate to appoint women in key positions. It is also good because it progressively installs the idea of more status equality in the mindsets of people and of children. Key jobs are not reserved for men. It is a process that takes time.

What could they do as the next step?

For companies, and particularly for Pulverizadores Fede, I think it is important that they continue applying their equality policies and that they make it as an argument, an example of good practice. For instance, if Pulverizadores Fede gets invited to a conference as a speaker, they should give the chance to their women staff to represent the company in front of decision-maker audiences. In my opinion, it is a good showcase.

What would you say to your 10 years old self?

I would recommend she stays on track. To believe that she can make it and follow her dreams. I know it sounds a bit cliché but I always have been a bit of a dreamer myself and in the end, it turned out okay!

What would you say to decision-makers?

It is a difficult question. It is tricky to put up a regulation that obliges companies to hire 50% of men or women. Would we still consider that it is fair when people get hired for quota reasons instead of their competences ? I am not sure it is the way to go. It should come from the inside. We should be more inclusive and take stock that gender equality is an asset for a company. Then it will come more naturally.

Ekaterina Ukhandeeva born and graduated in Russia has been working in a Spanish company Pulverizadores Fede since 2012, developing her career in sales of agricultural equipment with a true hope to contribute to sustainability, profitability and gender equality of the sector.